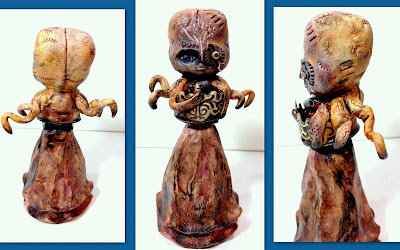 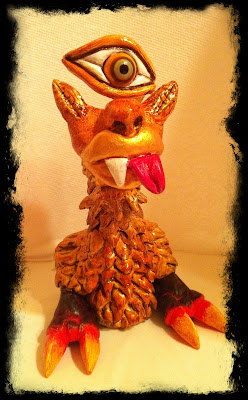 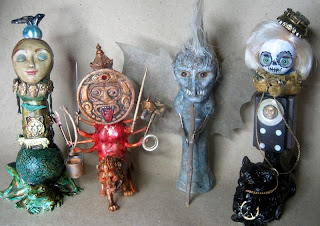 Just finished up my Pez Dispensing Totem workshop.  Here are some of the Pez-ilicious creations that came from the class experience. Swwwwwweeeeeeet!


Check out the gallery below

Now a word from our sponsor....

Don't forget another class is starting up May 4th.
the Morpheus Box.  Hope to see you there! 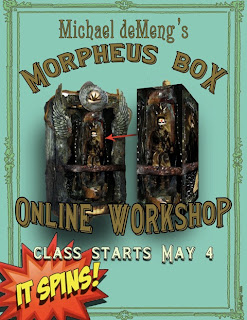 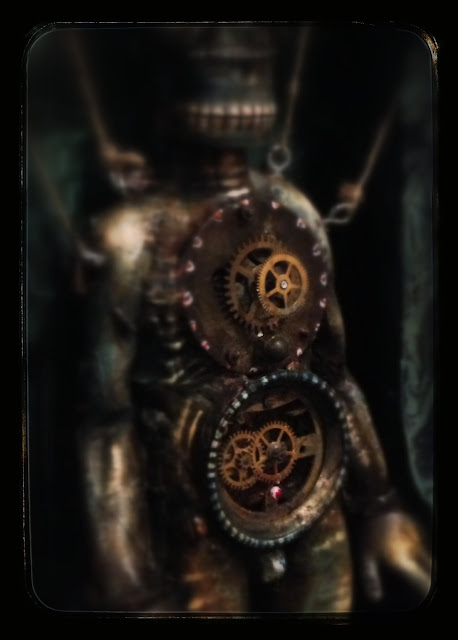 The first thing I like to point out when discussing Frankenstein (which admittedly doesn't happen all that often…though probably more often for me than most) is to point out that Frankenstein is the mad scientist not the monster….the monster is... Frankenstein's monster.  In the original story by Mary Shelley the creation is nameless.  The creature does refer to himself to his creator as the "Adam of your labours".  The doctor has a variety of terms for his creation including: "creature", "fiend", "the demon", "wretch", "devil", "thing", "being" and "ogre".    Sounds like a dysfunctional family to me.

Let me give you a bit of back story on the novel.  It all started back in the summer of 1816 when Mary, her husband Percy Shelley  (yes, the poet), Lord Byron (yes, also…the poet) and John Polidori (physician and author…back then you could be both), got together for a weekend of debauchery on Lake Geneva.  During this little get away, Lord Byron proposed a challenge…he wanted to see who could create the best gothic horror story.  Percy Shelley, as far as I can find, never created anything for the challenge.  Lord Byron wrote but  a fragment of a story about an aristocrat, named Augustus Darvel who plots his return from the grave.
Polidori, in turn used Byron's main character as the basis for his offering, later entitled "The Vampyre" (the main vamp, by the way, is considered not only to be based on Byron himself,  but some think that it was the inspiration for Bram Stoker's Dracula).   Meanwhile, many months later, Mary Shelley, awoke from a nightmare about a scientist, who after creating life, was aghast at his creation…thus Frankenstein, The Modern Prometheus was born.

In the film versions, the creature is sewn together from various cadavers, but in the novel,  Victor Frankenstein's method is a bit nebulous.  Alchemy is referenced but as for the use of the deceased the only reference is this: "Now I was led to examine the cause and progress of this decay, and forced to spend days and nights in vaults and charnel-houses,"

The basic story line in the novel is that Victor Frankenstein creates, and upon seeing what he has done, he is repulsed and flees.  The monster is left alone and bewildered searching for his creator.   The creature's encounters with humanity is somewhat discouraging.  After rescuing a girl from drowning he carries her to shore A man sees the creature and assumes he is the nefarious culprit, fires a gun and wounds the monster.   Eventually he manages to track down Victor and tells him that he wishes to stay far out of humanity's way but that Frankenstein must create a mate for him…and then he will vanish.  Frankenstein agrees.
The doctor nearly finishes his second creation when he starts to fear the consequences of an entire race of monsters.  Dr. Frankenstein destroys the woman…all while his first creature watches from a window.  Needless to say he is enraged.  The monster vows revenge saying that he will be with Victor on the doctor's forthcoming wedding night.

Victor marries his beloved Elizabeth and expecting an unwelcome visitor, asks her to retire to her room. Frankenstein searches the grounds for his creation with no avail…until he hears the screams of Elizabeth.  Through a window Frankenstein sees the monster taunting him over the corpse of Elizabeth.  Victor vows to destroy his creation and travels the ends of the earth trying to do so.

In the final scenes, Frankenstein is aboard a ship, ill and exhausted.  He has pursued the monster to the North Pole.   After convincing the captain to press on despite the weather, Victor dies.  Aboard his ship the captain finds the monster.  The creature grieves over the death of his maker and has found no comfort in Victor's death.  He tells the captain his story his version of events, and that , in his despair, he will destroy himself by flame in his own funeral pyre.  The creature drifts away from the ship on an ice raft...into the darkness.

When I first read this book, I was in eighth grade.  I remember thinking that if they ever made a movie that was true to the novel, they should use Led Zeppelin's Immigrant Song as the theme song.  You kwow:


A-ah-ahh-ah, ah-ah-ahh-ah
We come from the land of the ice and snow


from the midnight sun where the hot springs blow
In fact when ever I hear this song I think of Frankenstein in deadly pursuit across the vast icy wasteland of the North Pole.

The films take a slightly different approach.  The square headed Boris Karloff is a mish mash…an assemblage, if you will, of bodies.  His brain, was taken by the doctor's sidekick Fritz, (that's right…not Igor), who grabs an abnormal brain instead of the one Frankenstein requested.  This of course leads to mayhem.   Like King Kong, the monster is a beast that doesn't belong in the world that it currently inhabits.  In one scene, the monster innocently plays with a young girl, throwing flowers into the water.  When the flowers are gone…the monster,  unaware of the harm, throws the girl into the water.  She drowns.

This, of course does not bode well for the monster….who is ultimately by the end of the film is chased by villagers to a windmill which it is burnt to the ground.  But fear not…like most horror movies…the monster returns…in Bride of Frankenstein…having fallen into a watery pit beneath the mill.
So now that you have the basic idea behind Frankenstein…lets do a bit of analysis.  Shelley's subtitle "Modern Prometheus" is a bit telling.  As the Greek myth goes…Prometheus is a Titan, who is credited for creating mankind out of clay.  He then steals fire from the gods to help humanity…for this Zeus punishes him.  For eternity he is bound to a rock where an eagle feeds on his liver.  Each day the liver is eaten, each night it grows back.   This continues until Hercules frees him.  Victor Frankenstein is not only similar to Prometheus in that he is a creator, but also in that he stole something that perhaps should not have been tampered with…and thus punished by the gods.    Thus is the nature of science…one never knows what happens when a door opens.  Consequences can sometimes never be predicted to the fullest effect until it's too late.  After Oppenheimer created the atomic bomb he said: "I am become death, the destroyer of worlds". 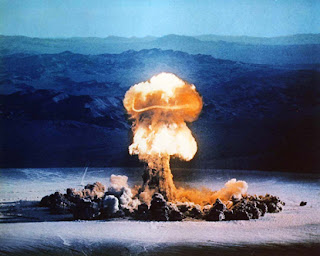 Not dissimilar to what Victor had to say about his monster: "I had worked hard for nearly two years, for the sole purpose of infusing life into an inanimate body. For this I had deprived myself of rest and health. I had desired it with an ardour that far exceeded moderation; but now that I had finished, the beauty of the dream vanished, and breathless horror and disgust filled my heart. "

It has been said that Shelley's Frankenstein tale was said to have been inspired by the Jewish legend of the Golem…a mythical man made of clay to protect the Jewish inhabitants of the Prague ghetto.
Ultimately, like Frankenstein's monster, the Golem becomes uncontrollable.  I did a blog post a few years back on this story.  Check it out here.

Ultimately we are left with a cautionary tale of science (or magic, or religion…depending on your perspective) and the man's limited ability to foresee all the potential consequences of his/her actions.  This does not mean however I believe that humanity shouldn't learn and grow…rather I believe that there is a risk of advancement that must be taken…but makers of any kind must take responsibility for what they do when they bring something new to light.  Unlike Frankenstein, who merely raised his arms and said: "He's not with me".

Okay on to my creation (which I take full responsibility for): 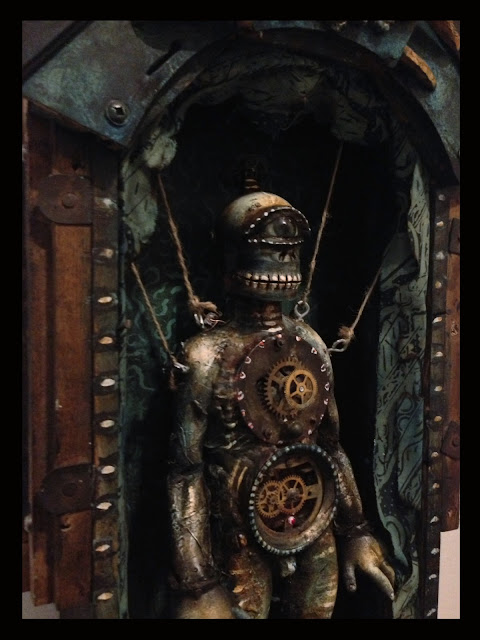 My Frankenstein monster was made from various bits of flotsam and jetsam.  Starting with the body of one of those Visible Man anatomy dudes.  Also, I liked the idea of having him part flesh part mechanical…an early Six Million Dollar Man. 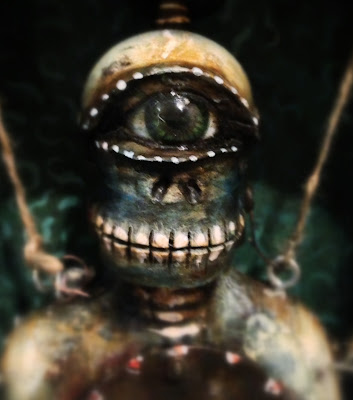 Yes it is true…my creature is cyclopian…it's what I do. 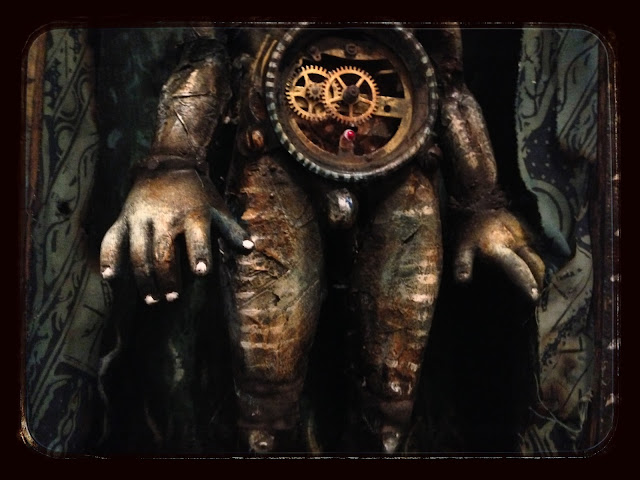 You know what they say about big hands… 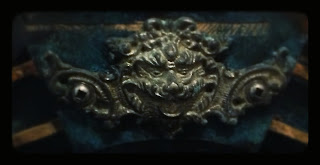 I found this awesome bit of ornamentation in New Orleans…seemed Gothic and appropriate. 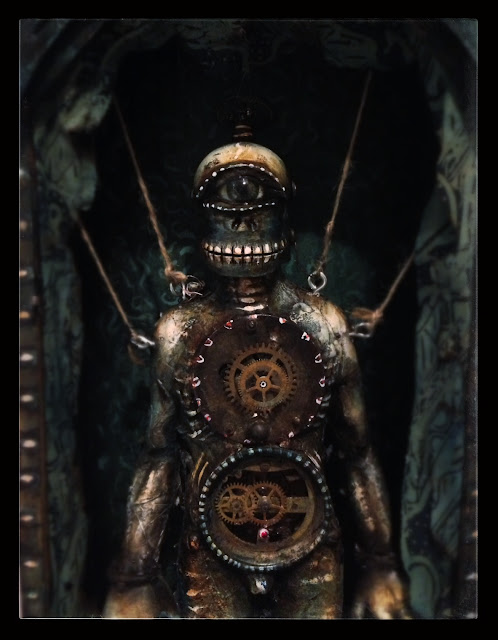 I liked the idea of having him bound and suspended.  A prisoner. 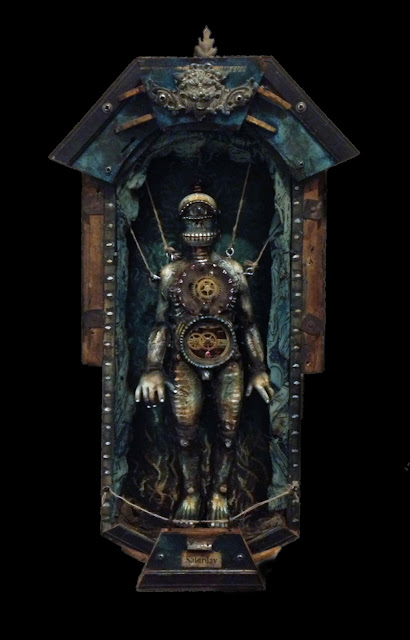 So here he is in all his glory…or should I say…gory. 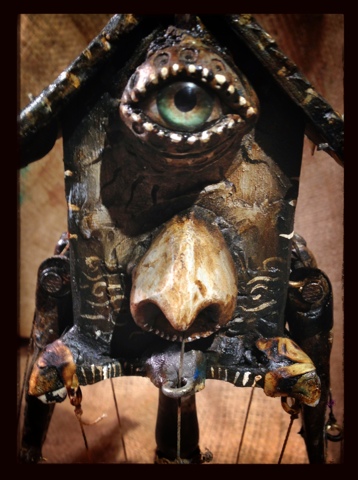 As many of you know I'll be teaching my Baba Yaga Birdhouse workshop this year. I thought I'd share my latest version of the theme.  For those who missed my blogpost explaining who in the wild world of witches Baga Yaga is click here. 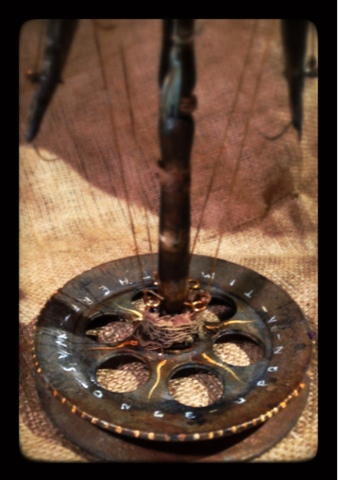 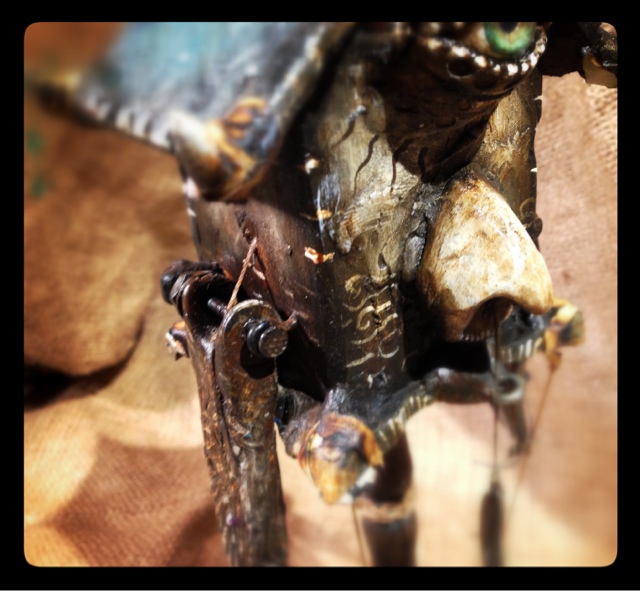 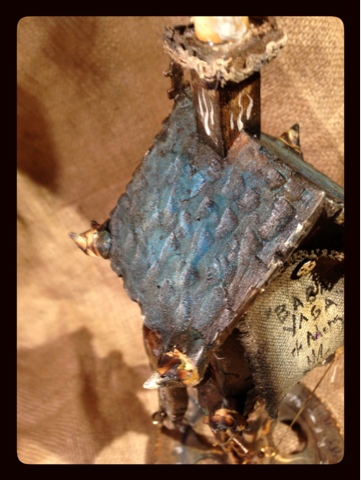 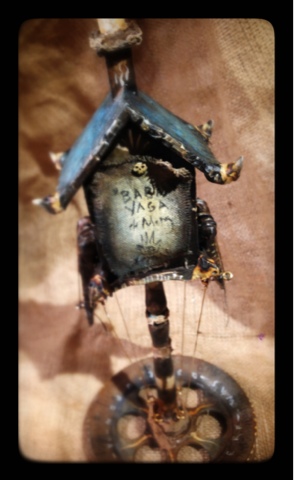 And here it is with exciting wing action:

This is where you can find this little birdhouse class:

Posted by Unknown at 5:52 PM No comments: Links to this post 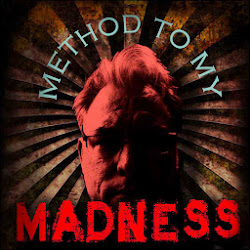 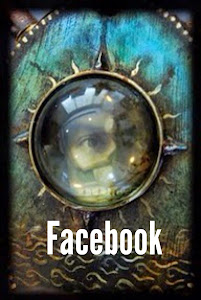 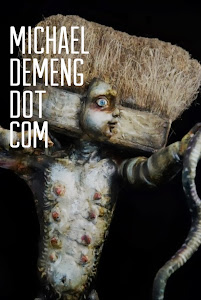 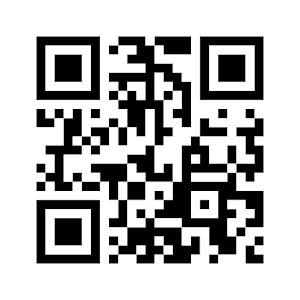 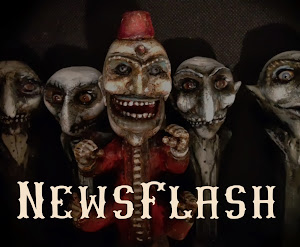 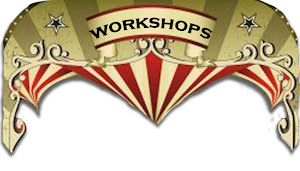 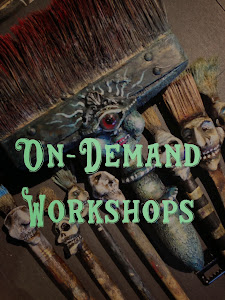 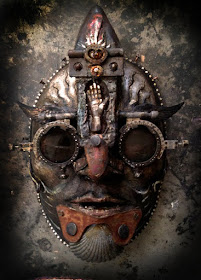 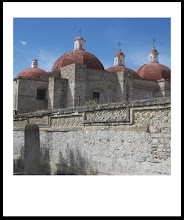